This is the fourth article in a five-part series on the 2019 National Championships held at Arena Badminton and Sports Club in Pomona, Calif. Tune in to read more articles!

Past partners, Jamie Subandhi and Vinson Chiu take the title win in the Mixed Doubles division at the 2019 Adult National Championships.

“At the Finals, we didn’t hold back at all and just went for it,” recalled Chiu. This was not the first time Vinson and Jamie have played together. The two had previously partnered on a bigger stage, the 2017 Sudirman Cup in Australia, where they could gain experience and success as a pair.

“Going into the tournament, we were both already familiar with how we play. Vinson has grown a lot since the last time we teamed up in Australia. He seems a lot more confident than before,” said Subandhi.

Although the team worked well together, there were still some minor setbacks in their journey to the Finals. During the semi-finals against elite junior athletes, Ryan Zheng and Esther Shi, there seemed to be a struggle to finish the first set.

“We had a pretty good rhythm, and then we sort of relaxed on the latter half of the first game, which allowed Ryan and Esther to catch up,” remembered Jamie. As their opponents seemed to regain their footing, Chiu and Subandhi were able to close out and win a very close first-set (24-22).

In the second set, the mentality between the pair shifted to a more consistent style and mindset. Chiu and Subandhi did not let up on any of the points and consistently capitalized on their opponents’ mistakes to take the second-set (21-11).

Jamie: “We just kept our rhythm and our momentum going.”

Having experienced such a close first set gave Vinson some concerns for the next day. On the other side of the bracket, Elias Frausing and Nicole Frevold outclassed their opponents and easily secured their spot in the Finals (21-3, 21-18). To quell any nervousness, Jamie and Vinson made sure to discuss their finals strategy and how to bring their best game to the Finals. 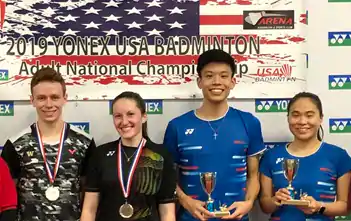 As the first match to be played on Sunday, Jamie and Vinson were prepared to win the Mixed Doubles final. During the match, Jamie handled the net very well, with little to no struggle to put away any stray birds that came her way. Vinson showed his backcourt effectiveness through simple plays and a dash of deceptively sliced drops. Subandhi and Chiu overwhelmed the opposing pair, Elias Frausing and Nicole Frevold, and captured the winning title in two straight sets (21-9, 21-11).

“It was nice to have Vinson back me up on this win. Mixed doubles is interesting – in that there’s a lot of teamwork that goes into it. We had talked before the tournament as well as before and after each match,” Jamie recalled. The dedication and communication between the two partners really paid off in helping them finish the tournament on a great note.

The 2019 Adult National Championships win was very important for both Subandhi and Chiu. It would be Jamie’s eighth Adult Nationals title, and Vinson’s first participation and title win. For future competitions, both athletes expressed their eagerness to see more familiar and unfamiliar faces from across the nation. Vinson encouraged that “the experience is much more important than the outcome.” He learned so much from the experience and owed a lot to the sport of badminton, as the sport taught him so much in life.

As both Vinson and Jamie remain at home during this quarantine, the athletes have been studying, working, and training at home. Vinson has taken the time to reflect on his badminton career and hopes to apply what he has learned to his upcoming Olympic journey for 2024. As for Jamie, she looks forward to graduating with her doctorate in physical therapy by Spring of 2021. She also hopes to provide future contributions to the sport of badminton, as both a competitor and a PT professional.

Jamie and Vinson encourage athletes to keep up their hard work and to encourage one another to pursue their dreams with great passion.

On behalf of USAB, we’d like to congratulate Jamie Subandhi and Vinson Chiu for their Mixed Doubles win at the 2019 Adult National Championships.

Stay tuned next week for the final article on the Men’s Doubles winners, Phillip Chew and Ryan Chew!