Have you heard about the new digital badminton museum? The USA Badminton Museum is now online and available to readers after a lot of work from its founders. Stan Bischof started the World Badminton Museum around 2000 with an historical collection of the Rules. The museum grew as stacks of magazines and other hard copy that he had collected were digitized. The new USA Badminton Museum is an offshoot of that work. Bob Cook was elected President of Pasadena Badminton Club in 1980 and established a badminton museum at the Armory in Pasadena. Donations of memorabilia continued over the next three decades at which point Bob realized it needed to go digital to be preserved and accessible to the world. He stumbled on Stan’s collection and the two began merging their archives.

Badminton in the U.S. can be traced back to the late 19th century, and has been led by three governing bodies:  the American Badminton Association (ABA) founded in 1936; the U.S. Badminton Association, renamed in 1977; and USA Badminton, renamed again in 1997. Diane Moore Hales wrote an excellent history of the development of U.S. badminton between 1878 and 1939 for her graduate research at Cal Poly Pomona, a copy of which you can find in the museum. The museum also has a copy of “How It All Began,” a history of the A.B.A. written by then Secretary-Treasurer Robert McMillan.

The publications available to the public in the museum include the earliest magazines like “Bird Chatter” from the 1950’s and 1960’s; “Badminton USA” from 1967 to 2003; “Badminton Magazine” from 1983-1989; “Badminton News” from 1991-1999; “Cross Court” from 2005-2012; and “Badminton Monthly” from 2013-2015. Tournament information such as locations and winners for events held are available for all the years of the U.S. Open, U.S. Adult Nationals, U.S. Senior Nationals, U.S. Junior Nationals, and U.S. Senior International. Media guides and newspaper articles are also digitized, with articles like the 1942 Duke University tournament a highlight. 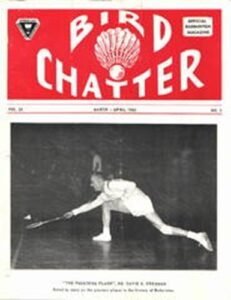 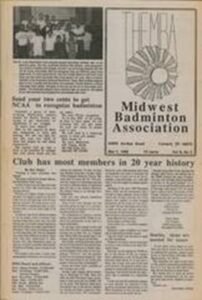 The USA Badminton Museum is a non-profit organization created for the gathering and digitizing of U.S. historical badminton documents, magazines, newsletters, videos, pictures, memorabilia, etc.  Chairman is Bob Cook; Vice-Chairman, Stan Bischof; and Head Archivist, Mary Ann Bowles. Take a walk through badminton history, and if you have items you wish to donate like old magazines, newsletters, posters, programs etc., contact Bob Cook at the museum. Search on Google for the USA Badminton Museum to check it out!